Through Robyn Dalrymple, I was lucky enough to guide spelling investigations with students at a couple of classes at a school in Melbourne recently.

Robyn prepared one of the classes by working with a teacher on a lesson on the base <log>. Here's a shot of the white board after that lesson: 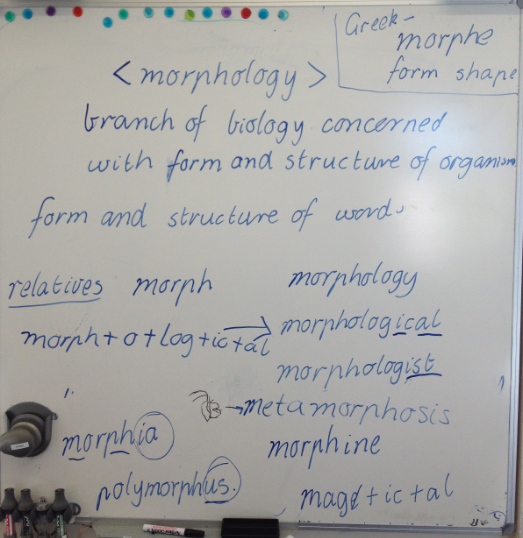 See Robyn's slide show for an earlier investigation with one of these classes on the word <magic> here that taught me about a new base! If you look carefully at the white board above, you will see that this class is already building on what they learned at that lesson.

But the reason for my post today came from this image of a matrix a student made on the Mini-Matrix-Maker after my session with them: 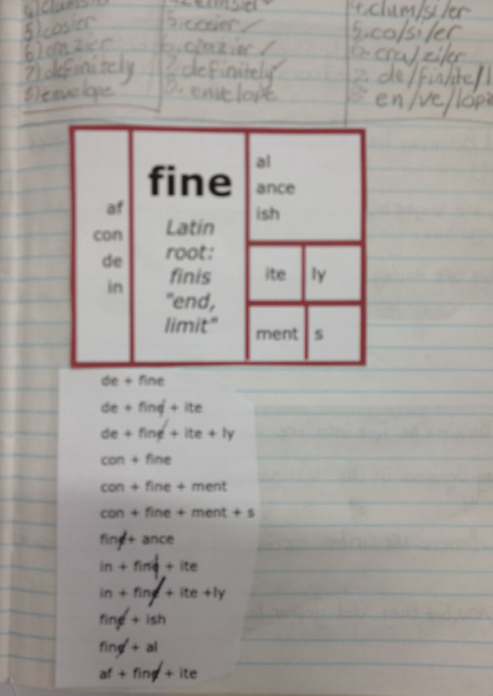 One word presented on this marix and with a word sum that surprised me was <finance>. I had never considered a connection between that word and the base <fine>. The proposed word sum:

passes the structure test. The word sum works. But I wanted to check the meaning test. Look at the etymological delights offered by Etymonline:

c.1400, "an end, settlement, retribution," from Middle French finance "ending, settlement of a debt" (13c.), noun of action from finer "to end, settle a dispute or debt," from fin (see fine (n.)). Cf. Medieval Latin finis "a payment in settlement, fine or tax."

The notion is of "ending" (by satisfying) something that is due (cf. Greek telos "end;" plural tele "services due, dues exacted by the state, financial means"). The French senses gradually were brought into English: "ransom" (mid-15c.), "taxation" (late 15c.); the sense of "management of money" first recorded in English 1770.

So Thank you to this studnet for introducing me to a new and deeper understaning of the word <finance>.

And finally, we get to the question I am specifically seeking help with.

I noticed this final word sum in the image:

Now, I don't know an attested word <affinite> but that certainly does not mean that it does not or could not exist. So that proposed word got me thinking.

And then I thought of the  word <affinity>. A quick jump back to Etymonline showed me that this word pases the necessary meaning test for it to be added to this matrix:

c.1300, "relation by marriage" (as opposed to consanguinity), from Old French afinité (12c.), from Latin affinitatem (nominative affinitas) "neighborhood, relationship by marriage," noun of state from affinis "adjacent," also "kin by marriage," literally "bordering on," from ad- "to" (see ad-) + finis "a border, an end" (see finish). Used figuratively since c.1600 of structural relationships in chemistry, philology, etc. Meaning "natural attraction" (as though by family) is from 1610s.

But did it pass the structure test?

My first assumption of a word sum built on the student's work with this structure:

But then I wondered if it might instead be analyzed this way:

This made me wonder if there even is an <-ity> suffix. Structurally, there seems no need for it. If one wanted to work with more familiar words we could look at something like:

and compare to either:

Since I try to guide my spelling study to the principle of "elegance" and the scientific principle of seeking the deepest structures that account for the greatest number of cases, why bother having three entities (the <-ity>, <-ite> and <-y> suffixes) if I can explain all the same spelling data with just two suffixes (<-ite> and <-y>)?

So off to do some meaning tests...

My Oxford on my Mac offeres this reference for <-ity>

-ity |ɪti|suffixforming nouns denoting quality or condition: humility | probity.• denoting an instance or degree of this: a profanity.ORIGIN from French -ité, from Latin -itas, -itatis .

Hmm. I'm not sure if I read this information correctly, but it made me start to think <-ity> is built on <-ite>. But I needed more evidence.

from French -ite and directly from Latin -ita, from Greek -ites (fem. -itis), forming adjectives and nouns meaning "connected with or belonging to." Especially used in classical times to form ethnic and local designations (e.g. use in Septuagint for Hebrew names in -i) and for names of gems and minerals.

Now I'm moving back to assuming we do need all three of these suffixes.

forming adjectives and nouns meaning "connected with or belonging to." Especially used in classical times to form ethnic and local designations (e.g. use in Septuagint for Hebrew names in -i) and for names of gems and minerals.

And <-ite>(2) as an alteration of <-ate> (which has three listings on Etymonline here) didn't convince me either.

Since I try to avoid going deeper than I know, I need to stay at my original working hypothesis

But I know know that I've surpassed my own abiltiy to analyze this etymological information (the meaning test) so I wanted to share my current hypothesis of three suffixes (<-ity>, <-ite> and <-y>) until I have solid evidence that I understand that <-ity> is unneeded.

Having reached the edge of my own understanding, I wanted to share this with the Real Spellers community to see if I can gain clarity on this question -- and my apparent need to be more clear on how to work with the etymology of affixes.

I'm curious to see where this word sum from a Grade 6 student leads my own understanding.

Thanks to this class for helping me see what I need to learn!