Charlie and Carinne's quest for the jobs of the final, non-syllabic e

I have had the pleasure of tutoring the son and mom team of Charlie and Carinne for some time now. The stories of Charlie's learning have been inspiring. When we started in Grade 1 he was naming letters accurately about 60 - 70% of the time and was quite frustrated. But he took to our sessions like a duck to water.

Before we get to the topic described in the title of this post - I think readers may enjoy this background of when we started working together.

One story I often tell in my sessions is about how even before he had his letter-names down, he quickly became an expert suffix finder. We began with me reading a favourite book that I suspected he would like with no intention of him reading on his own. I would read for a bit just to get into the story, and then I would start to pause and look at words that I though might have something interesting to investigate. When I found a word I wanted to study, I would ask him to spell-it-out-loud. That was how I found out that he was still learning letter names. Good thing I didn't go 5 minutes before I was aware of that issue.

He loved the book, and we kept on going. Soon we hit a word with an <-ing> suffix and we discussed the idea of bases and affixes. I suggested Charlie keep a look out for any words with an <-ing> suffix. It took about one minute for him to find the next one. It is worth noting that the <n> was one of the letters he misnamed earlier in that session. But now with our practice of spelling out affixes quickly in a group "ing" he was getting practice with that letter name. Of course it is illogical to talk about suffixes without talking about the base or stem they are fixed to. Soon we found words ending in <ing> that did NOT have an <-ing> suffix like "spring" or "king".

We were also spelling digraphs and trigraphs we encountered in a base. So I would help him spell-out a word like "teaching" highlighting graphemes in the base and then pause before the suffix "t-ea-ch---ing". (See the conventions I use for 'spelling-out-orthography here). Soon, when Charlie would spell out words, he would start by spelling a base like <teach> one-letter-at-a-time, like this "t-e-a..." then correct himself, "t-ea-c..." then correct himself again, "t-ea-ch". He was becoming a grapheme finder too! Nailing down the graphemes in the base, including digraphs, helped us attend the those grapheme-phoneme correspondences.

These were interesting "puzzles" to Charlie. He's a bright kid, so this kind of investigating of the spelling structure/meaning of words grabbed his intellectual curiosity. Soon we were finding new suffixes and prefixes, and sorting out the bases they were fixed to. I suggested he and his mom (who was right at Charlie's side studying along with us) create a morpheme chart to start collecting prefixes and suffixes with sticky notes. That way at our next session, he could share what he found and we could look at that together. He was psyched.

I'm guessing we were in about our 4th or 5th session when we hit a word with an interesting suffix that is not super common. Perhaps an <-ee> suffix in a word like "employee" or "refugee." After we worked it out, I mentioned, that I don't think he had that suffix on his chart.

"Mom!" shouted Charlie. "We have a new suffix for the chart!"

Charlie ran back to his morpheme chart and added the new sticky note with this suffix. But when he got there, he couldn't resist telling me all the suffixes he had found. I'm guessing there were about 20. But to tell me his suffixes, guess what he had to do? He named his suffixes by spelling the letter names of those suffixes quickly as a group. This was the only way we ever referred to morphemes, so it did not occur to him to pronounce any suffix. He launched through his 20 suffixes with confidence and pride.

After the session, I was talking to his mom and asked if she had noticed the utter transformation of Charlie's ability to name letters confidently. It was not just in the suffixes that he was naming letters quickly. When we spelled bases, he was catching digraphs and trigraphs more and more. Carinne laughed when I mentioned his improvement in naming letters. She had just been talking with his teacher about that.

Think about how we motivated Charlie to get better at naming letters. I didn't wait until he was solid in grapheme-phoneme correspondences before I got him to attend to morphology. I used the meaningful spelling patterns of morphemes that he could see on the page to motivate him to name letters.

Here is a message I received from Carinne after working with Charlie for a month or two.

I want you to know that the work you have done with Charlie is truly priceless to myself and my husband! Charlie is reading - not perfectly, not everything - but he is confident and willing to try with words he doesn’t know, and it is absolutely amazing to me to see this wonderful progress.

He's now in Grade 2 and they moved to a new school that has mandatory Friday spelling tests. After all the skill and confidence Charlie gained, I was determined not to let him get his confidence blown by poor scores on random word lists. I helped him study for his test. Fortunately, this list had a number of suffixes, and we could work with word sums and help him quite easily.

The next week, I got an email from Carinne with this message, "Help! This week's list has no suffixes!"

Think about that statement for a moment. For Charlie and Carinne, words without suffixes are harder to understand.

This list was supposed to be about "vce words" in which a "single, silent <e> made the vowel letter long."

We investigated these words and talked about the jobs of the final, non-syllabic <e> we could find. Charlie was in it. We started to find multiple jobs of this orthographic marker <e>. After our session, I said that I would write up what we had discovered, and all the jobs we found together so that he and his mom could look for more jobs before our next session.

After being an expert affix finder and a grapheme finder, he is not psyched to be a finder of the jobs of the final, non-syllabic <e>.

I'm attaching the document I shared with Charlie and Carinne that describes what we learned and sets the stage for more study to find more jobs of the final, non-syllabic <e>. I'm regularly asked about what other jobs this <e> are. Why not learn from the work of a Grade 2 student to begin your own search.

I hope people share ideas for more jobs in the comments!

Below is a screen shot of the first page of that 4 page document. 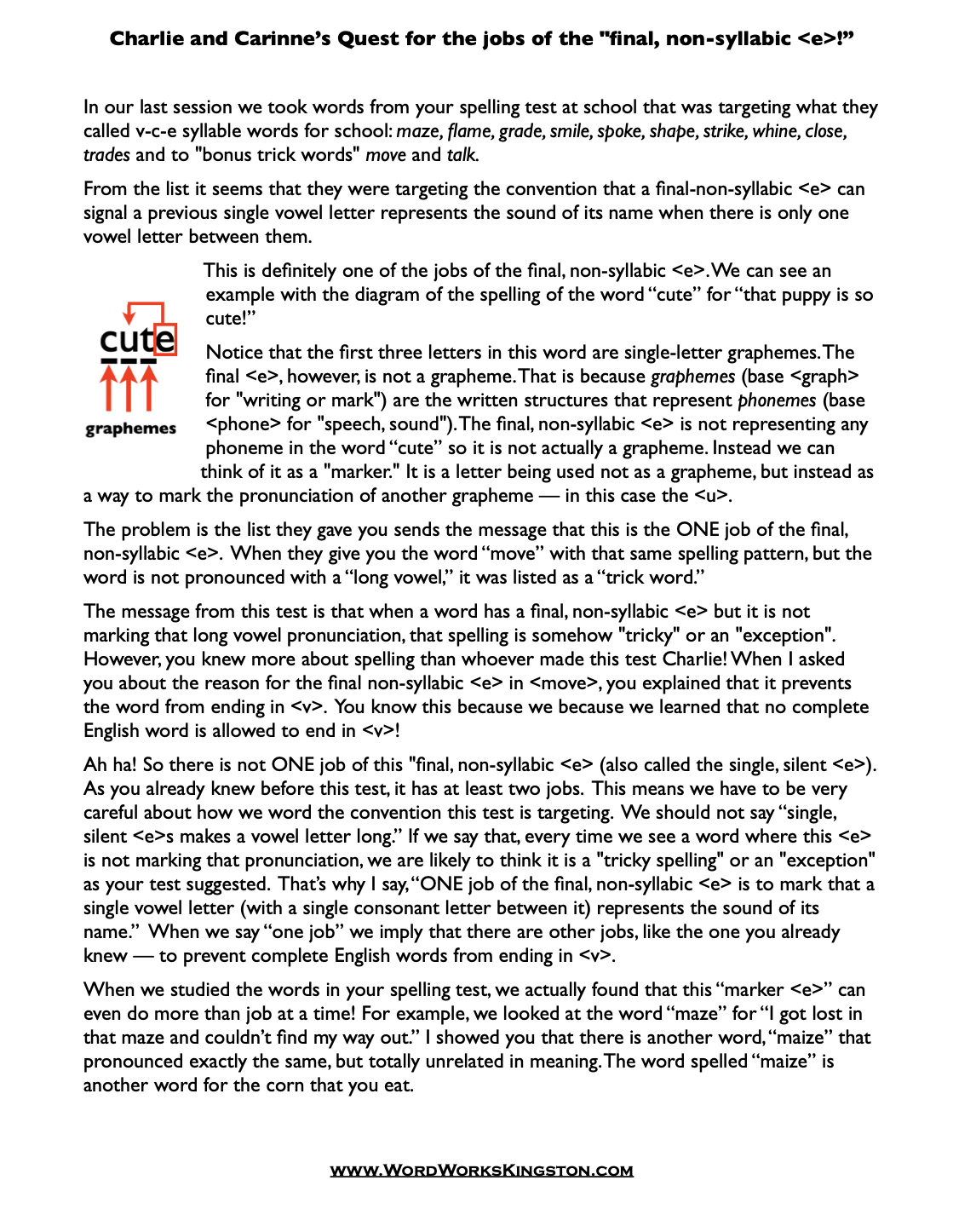