Are "indicate" and "dictate" related

I will respond with comments in the text of your message.

You write: "I thought that I would start with dic, dict which means to say or to tell."

I'm curious to know the source of your hypothesis of <dict> and <dict> comes from. You are on a good track here, but one key aspect of scientific word investigation is that whenever we present our hypothesis of a morphological structure, we should do so with evidence from a word sum. I see lots of evidence for

And when I look up the root of both of these words on Etymonline, I find my way to the Latin root dicere. And in these searchers I do find denotations "speak, say, tell". By the way, I like to show the structure of Latin roots by putting parentheses around the Latin suffix. So for this Latin word, I could represent its structure like this 'dic(ere)'.

While this Latin root and its structure does make me wonder if there is an English base <dic>, or perhaps <dice>, off hand, I do not yet have a word in mind with that base - without the <t> we see in <dict>. We can come back to that point later.

In the next section of your post, I'm going to use the angle brackets to identify that these words are not just a part of your sentence -- and that it is the orthography of these words you are studying. When we are presenting a spelling (not just a word) to study, it is extremely helpful to make that clear with those angle brackets. In linguistics, these angle brackets < > indicate that what is inside is orthographic. When writing in Real Spellers, the computer needs you to put the text inside angle brackets in bold. That's the only way the program knows to show what is inside angle brackets. I'm also adding the parentheses to show the Latin structure of the root you write, and I like to use single quotation marks around roots just to signal to the reader that this word is not part of the sentence, but something that is being referred to. Finally, when I write the denotation that we get from a root, I always use double quotation marks. Again, this helps the reader realize that those are not words in the structure of the sentence, but something that is being referred to. I encourage the readers to consider for yourself if these conventions make the meaning of this text easier to follow than when all the text is written in the same way. With that in mind, here is the next part of your excellent question...

"I thought that I would show the two words <dictate> and <indicate> because the stress is different. In looking at these two words and my word list, the words with <dic> and <dict> with the stress on them like <dictate> come from 'dic(ere)' which means to "tell or say" and the ones with <indicate> or <abdicate> that come from 'dic(are)' which is closer to to "show". They both back up into the same root '*diek' which means "show". How do I walk the kids through this? How do we explain going from '*diek' to 'dic(ere)' or 'dic(are)' to

Wow, Shelley, first of all, you are to be congratulated for the path you have already taken. Clearly you have been digging in and researching and have found a great deal of information. Because you've done that and explained the trail of your investigation so clearly, I (and others) can help you come to a clearer understanding of the process you and your students can do. But I want to start by identifying just a couple of key principles of investigating orthography that are essential for any scientific orthographic inquiry that come to mind due to your investigation.

1) Always use word sums to come to any conclusion about morphological structure.
2) Be very carful about the difference between morphology and etymology. It is very helpful to mark that understanding by using the term "base" or "base element" when referring to the current English morpheme (the word "element" in "base element" indicates you are referring to written morphology, not oral.)

3) Do your best as a scientist to never do deeper than your evidence. Never worry about not going "deep enough" -- just go as far as the evidence you can make sense of.

To start to respond to your question, I will just follow the path I would follow with you or any student - or myself if this was my own question. 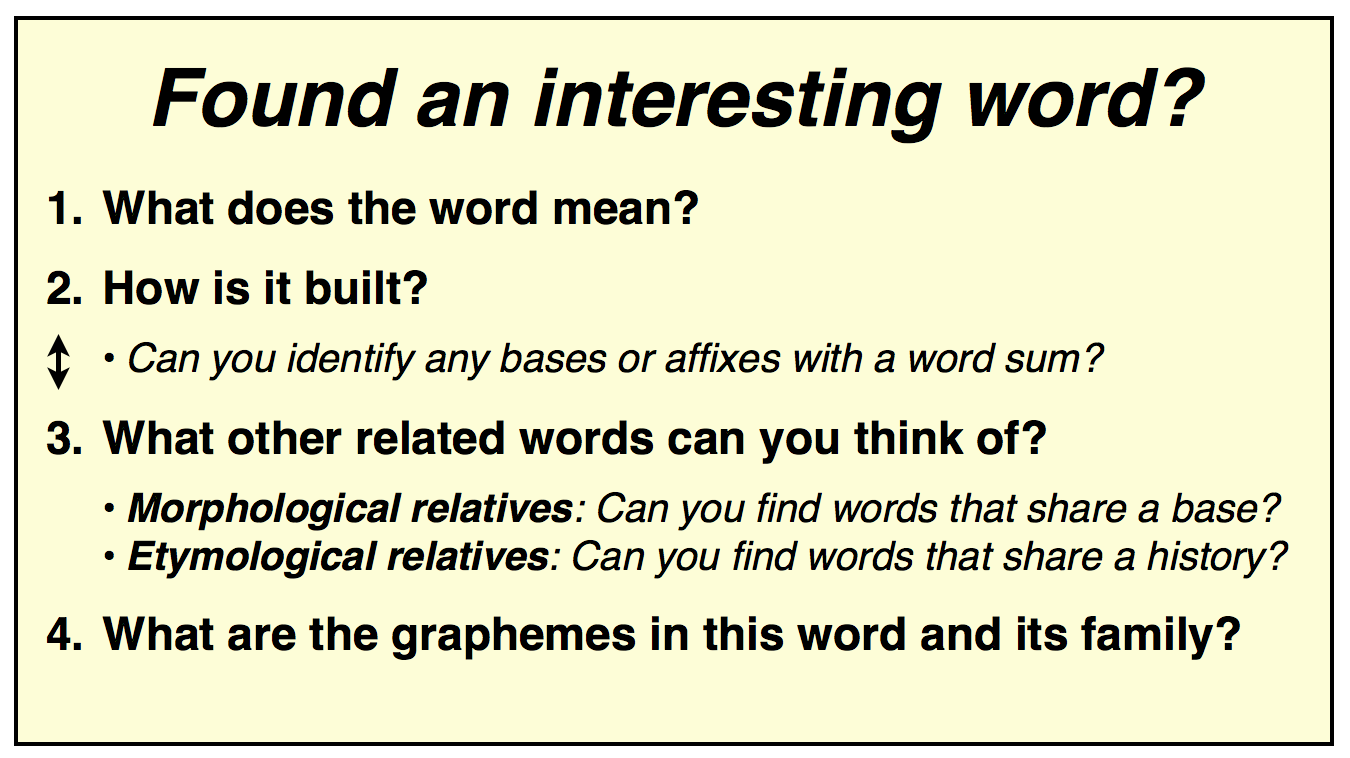 So from a simple first pass at thinking about the meaning, there seems a logical connection.

The second word sum makes me puase as I notice that it doesn't have the <t>. I also recognize that with that vowel suffix <-ate> the base of that word may be <dice>, so I'll record that second hypothesis for that word structure:

Regardless of what else I find, I see that these two words do not share the same spelling of the base. there is not <dict> in <indicate> not matter what else I find! Cool, so now coud be a good time to look at the etymology. Do they share a history? It's clear from you post that you did this work. I'll paste some of what I found:

From the detailed question you gave, I see that you found that both of these words go back to what you called "deik". But when we inspect the entry in Etymonline, we see that this is refered to as the "PIE root *deik-" for "show".
You probably noticed that little asterisk before that PIE root. In etymology, that astersik marks that whatever follows is reconstrcted from other kind of evidence - but it is not a root that anyone has seen written down. The letters PIE stand for "proto Indo-European root. This is something to look into at another time, but for the moment, to stay within the written evidence of your current understanding, we can just say that there is some sort of connection betwen these words, but not one that I totally understand yet. This means I can ask myself, what is the deepest written root for which I have evidence for these two words. With that question I see this"
The deepest written root for <dictate> according to Etymonine is 'dic(ere)' for "say, speak"
The deepest written root for <indicate> according to Etymonine is 'dic(are)' for "proclaim"
Hmmm...
Boy do those roots look similar -- but not identical. And the denotation seems very similar -- but "proclaim" is not the same.
My own personal understanding of Etymology is not enough to be able to conclude that "dic(ere)" and "dic(are)" are the same. I do know that "-ere" is a common Latin infinitive suffix. I don't know as much about "-are".
So I want to be very clear here.  I'm not concluding that these words are  unrelated. I'm just saying that I don't yet understand their etymological relationship, so I can just stop here and sat that these two words have different bases that may or may not share a root, but until I can prove that connection, I'll just let them be different base elements in different etymological families.
I don't yet have evidence that I understand to prove that <indicate> and <dictate> are in the same etymological family. If I were a betting man, I'm pretty sure someone else could make sense of that connection -- but I'm going to be a good scientist and stop right there.
But what else might I do now?
One thing that is super valuable to know about Etymonline is that we can past not just English words into the search engine, we can paste in roots. I went ahead and pasted the Latin root 'dicere' into the search engine and found this fascinating bank of words.
You always have to inspect the entries in Etymonline carefully. The search engine just looks for any entry with the letter sequence you type. It may be that some of these entries refer to 'dicere'  in some parenthetical statement. But If you search in this list, you will find many words that can be analyzed with a word sum showing a <dict> base. If they have that base and the 'dicere'  root, you can make a coherent word sum with at <dict> base, then you can safely include those words in a matrix for the bound bae <dict> with the orthographic denotation "say, tell".
When you look at the words, you will find many that do not have a <dict>. As long as they are shown to derive from the Latin root 'dicere' then you know they are in the same etymological family as your words with the <dict> base, but you cannot put them in the same matrix. You will find a couple of very interesting words in this bank that may be analyzable with a <dic> or <dice> base. If you can prove that analysis, and if those really come from 'dicere' you will have found evidence of a base <dic> or <dice> from the same root! That would be fodder for further study of if and how 'dicere' and 'dicare' relate to eachother.
But the key thing too keep in mind here is that there is no hurry!
From this investigation so much has already been uncovered, not only about this word, but about the process of investigating words. You've identified the edge of your understanding, and I hope that this response has helped you expand a bit of what you know.
You also know -- and have helped reming me that it would be helpful to understand the relationship between words that share a Latin stem, but differ with an <-ere> or <-are> Latin suffix. Now I have encountered this many times. And I'm sure I've actually had occasions when I thought I understood. But now I see, I have not yet resolved this fully for myself.
I suspect many readers will have come this far and are wondering why Pete hasn't pointed Shelley to LatDict to find the other parts of the Latin verb dicere which will bring us to another part of this verb that helps make sense of the <t> in <dict>. That is certainly a possible next step, but there is already more than enough here to ponder for now!
One thing that your question highlights, that I woud target first is deepening your understanding between the difference of morphology and etymology. I encourage you to go to THIS LINK on my website where I have more on this question. In particular, I redommend that you watch the video right at the top. It uses a different set of words to walk through this same process.
I hope that you and your students work at creating a matrix on <dict> and that you share it with me. Feel free to email me at <This email address is being protected from spambots. You need JavaScript enabled to view it.>. I would love to post an image and stories of any follow-up work that you might do.
Thanks for jumping in and asking your question after clearly having done a good deal of research on your own! Because you did, I was able to provide far richer feedback.
Cheers,
Pete