Science of the spelling of "said"

This post on the science of the spelling of <said> started as a response to a question and response by Felicia and Tom. Because this is such a common question, I decided to make this a new post instead of a comment on that string. It will be easier to find this post through the search engine this way. It won't surprise many of you that an interesting spelling like this offers a brilliant launching pad for encountering a whole host of orthographic understandings. Being able to understand and explain this one spelling is useful -- but the lowest of my goals of this post.

To see the orginal string started by Felica go HERE.

This is an old classic. Sorry I didn't notice your question for so long Felicia!

A key term both of you used in your comments was "seem". I certainly see why we would expect the spelling of the past tense of the word <say> to follow the default suffixing process of adding an <-ed> suffix. That structure would look like this:

I have added the asterisk to signal the non-standard spelling that results from this word sum. I know about the suffixing conventions for <y> / <i> changes. The default is to change a final <y> of a base or stem to <i> when adding a suffix  unless we have a good reason NOT to.  As far as I know there are only three good reasons not to make that change:

Since the base <say> has a final <ay> digraph, not a final <y>, I should not change the <y> to <i> if I were to add an <-ed> suffix. On top of that, there clearly is no <-ed> suffix in <said>! I also know that we NEVER change the first letter of a suffix during suffixing, so I'm not going to just make up a convention of "dropping that initial <e> of the <-ed> suffix."

So what do we do when we use a word sum to test our hypothesis that the word <said> is built on the base <say> with an <-ed> suffix, and we find that it doesn't result in the attested spelling?

We get to reject our hypothesis and look for another understanding!

This is a crucial moment for spelling scientists and any fellow investigators. I encourage taking this moment pause and explicitly celebrate this brilliant linguistic tool of the word sum that helped us stop accepting an assumption that clearly does not stand up to the evidence. When a word sum doesn't work out the way I initially expected, I have consciously developed the habit of saying something like, "Awesome! That wasn't what I expected!"

I'm moving out of orthographic content for the moment here. What I'm suggesting is that we take advantage of the context of trying to understand a specific spelling as an opportunity to joyously share the experience of the essence of scientific inquiry. The absolute central concept of scientific inquiry is falsification. If we are trying to understand something about how our world works, but we don't have a way to falsify our hypotheses, we are rejecting of science. And rejecting science is a sure way to ensure that we fail to understand!

This introduction of scientific thinking (falsification) to the study of spelling deserves celebration. The key value of the word sum as a tool for the analysis of spelling is that allows me to falsify assumptions that are blocking my understanding from moving forward.

OK -- back to the orthography of <said>.

Since our word sum didn't result in the attested spelling, we must reject the hypothesis that word sum represented. Whatever the structure of <said> turns out to be, we now know it is not a base spelled <say> with a suffix <-ed>. That understanding is worthy of celebration!

One alternative hypothesis immediately occurs to me the moment I construct a word sum and I find evidence that what I thought was a base of a word turns out not to be. The instant this happens -- I encourage spelling scientists to think, "Maybe instead of sharing a base these words just share a root. (See a new WordWorks YouTube video on this topic HERE.)

To guide our inquiry, we could draw from the "4 questions" chart I use to remind myself of productive questions to ask. 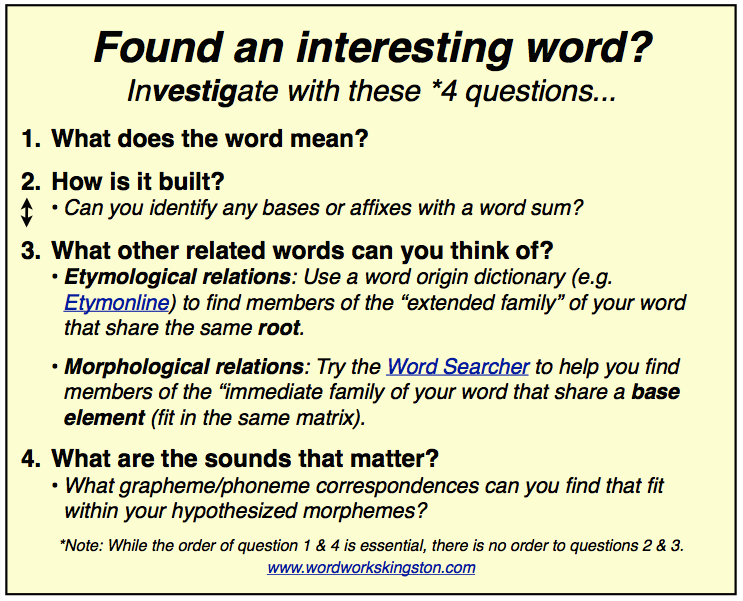 We have a good sense of the meaning of <said> as the past tense of <say>. And right there, we have an opportunity to remind ourselves of a key orthographic lesson -- adding the suffix <-ed> is clearly not the only way to mark the past tense! I could brainstorm with my students for other words that don't use this suffix to mark the past tense. Some common examples might include: <ran>, <slept>, <taught> and some of the words you two identified like <went> or <paid>. A collection of such words can provide a rich bank for later study -- but at least we have highlighted the evidence that there are many ways to mark the past tense -- adding <-ed> is just the most common. Let's not make the dangerous mistake of signalling to children that the less common thing is "bad". Instead, this is where the interesting things happen!

So now my chart reminds me to look for more relatives. Unsurprisingly, a search of Etymonline for <said> brings me to <say>. The entry for <say> shows an interesting long history, but for many, it may not be clear what information in there will help me understand this spelling. One important hint that our bank of non-standard past tense words has to offer us is that these are all very old and very common words. That's not random, but perhaps a story for another time.

Like the two of you addressed in your posts, I'm noticing that there seems to be a relationship between the <i> of <said> and the <y> of <say>. This is yet another opportunity for learning. Apparently this <y> <i> relationship is not restricted to the <y> / <i> change that occurs in suffixing. The word <paid> offers a second example in the past tense context. If you've seen my workshops, you are likely to have seen another example of a <y> / <i> relationship that is not part of suffixing at all. I often investigate these three words:

Do you see it? Ah, the <y> of the <ey> digraph in <they> and the <i> of the <ei> in <their> helps link these words of related meaning with similar spellings.

We've already encountered a number of interesting orthographic ideas, but we still have not come to any clear understanding of our original question. Perhaps I could use the Word Searcher to see if typing the letter sequence <sai> presents any interesting data to study.

And look what I find right in the initial 5 hits of my bank of evidence...

Do you see something interesting there? Do you see a word connected in spelling and meaning with <said>?

Check that word <saith> as in "Saith the lord." That's an OLD word, and it has a connected spelling to the word <said> which is also very old. (Douglas suggested c. 1300 in his Etymonine entry.)

Well then. I wonder what Doug has to say about the etymology of <saith>? It turns out he didn't have an entry for <saith>, but this entry for <says> came up from that search:

We now have an interesting bank of words to investigate...

We know that <saith> is older than <says>. I also know that there is an old Old English suffix <-th>. What if the word <saith> had this structure:

I was most impressed, Felicia, that you raised this idea of "productive" and "non-productive" suffixes in your original question.  I've learned from Real Spelling that there is a non-productive suffix <-d>. A non-productive suffix is one that is not currently being used to generate new words. When we make up new verbs and we want to then marke their past tense, we are pretty boring these days. We simply add the productive suffix <-ed>. Once we started verbing the recent word <Google> we also came up with the need to mark that verb in the past tense. Nobody told us that this had to be -- but the attested spelling became <Googled> with this structure <Google/ + ed>. Perhaps a few English speakers and writers were hoping for a new strong verb and tossed out *<Gagle> or something similarly non-standard construction into the world of English readers and writers. If they did, it clearly did not fit for the rest of us. English spelling evolves -- so we always get the spelling that best fits for English readers and writers.

Let's pause and revisit the evidence we have been uncovering:

[Editor's note! After posting, it was pointed out to me that the <-th> in <saith> is not the same as the <-th> in <wealth> and <health>. I think we can still find evidence of the structure <sai + th>, but I have more work to do there. See my comment for more.]

All of that allows me to propose analysis of my four words listed from the etymological family of <say>:

And so, after this long journey, we should be reminded of something I mentioned at the start. The moment a word sum falsifies our hypothsis that  two meaningfully related words share a base -- we should wonder out loud "Maybe they just share a root?"

Our initial word sum attempted to link the words <say> and <said> with a common base. The moment our word sum rejected that hypothesis we should have thought "maybe these words just share a root, not a base." And that turns out to be exactly what is going on! Look up <said> in Etymonline and it will point you to it's etymological relative <say> with this information about its root:

Our word sum analysis gives us evidence that <say> and <said> do NOT share a base, but the etymological evidence shows that they derived from the same Old English root secgan.

For another example of the common error of holding onto a morphological hypothesis that a word sum has clearly rejected, go to THIS page that uses the spelling of <wise> and <wisdom> to get at a similar story.

So thanks Felica and Tom for raising this question for us. I've long needed to create an account of this investigation.