I've been fortunate enough to be tutoring with a wonderful mother-son team of spelling scientists via Zoom recently. Within  their first 4 sessions they have asked so many rich questions and made many great discoveries. Recently they came up with a couple of questions that are particularly rich, and which I was unable to resolve fully myself, so I wanted to draw on the Real Spellers community for further help.

I'm including the excellent question the mother sent me, and I'll just make a couple of initial comments of my own (in blue between her comments. I hope that we can get some help from the community on this topic.

For those reading this question, I  want to highlight how quickly this mother has already taken on the practice of using the correct linguistic symbols of anlgle brackets for spellings and slash brackets for phonological information. I am also so impressed with the construction of her question with so much evidence of the research they have done. What a great learning journy this mother is taking with her son. The only edit I have done to this emailed question was using the correct IPA symbol (/ʤ/) for the phoneme I know she meant to identify.

Here is the question I received in my mailbox (my comments in blue).

You invited us to write up our questions from our recent joint investigation of <jerkily>. Please do clarify and correct anything you wish, and if you find out more we'd love to make more sense of this word.
My son used the sentence: "The drunk driver played loud music and drove jerkily. He left rubber on the pavement because of the way he was driving."
My son was emphasizing the use of <jerkily> as a sudden stopping motion.
We checked etymonline and found:

This told us that <jerkily> comes from <jerk> so we looked up <jerk>:
Well done following Etymonline carefully.

"to pull," 1540s, "to lash, strike as with a whip," of uncertain origin, perhaps echoic. Related: Jerked; jerking.

We found that <jerk> was of uncertain origin!
This is one of the things I love about Etymonline. It is so good at sigalling readers when there is unclear evidence about words.
We also found out that it was "perhaps echoic." <echoic> sounded like it came from <echo> but that didn't seem to make sense for the origin of the word. So we looked up <echoic> to see if it had some special meaning. We learned that it is simply echo + ic. So we looked up <echo>:
I was surprised by this use of the word "echoic" also. My guess was that this must be another way if indicating that the word was an onomatopoeia. I'm not sure why Douglas doesn't use the standard term here.

mid-14c., from Latinecho, from Greekecho, personified as a mountain nymph, from or related toekhe"sound,"ekhein"to resound," from PIE root*swagh-"to resound" (cognates: Sanskritvagnuh"sound," Latinvagire"to cry," Old Englishswogan"to resound"). Related:Echoes.
So <echo> is related to sound. How is <jerk> related to its sound? It is not obvious to us, so this is one of our questions.
It's still a question for me, and for Etymonline as you note that he says "perhaps echoic". It seems like a strange onomatopoeia to me too, but frankly most words attested to be like this don't sound too much like what they represent either!
We looked at other meanings for <jerk> to see if we could gain any new information there. We found:

as a method of preserving meat, 1707, American English, from American Spanishcarquear, fromcharqui(seejerky). Related:Jerked.
<jerky> as in <turkey jerky> is from a totally different origin from the <jerk> that relates to a lash or whip. This one is from Spanish, and that makes some sense to us.
Seems to me like you've uncovered an homographic pair of words too. I went to Etymonline to look myself and found these two entries for <jerky>:

Certainly no etymological link here. And this is a treat for me because I've been looking for some time to find a word pair that are homographic, homophonic AND polysyllablic. I typically find thee in monosyllables. I'm sure there are more, but this is the first one I've consciously noted. Thanks!
Then we looked at the noun meanings of <jerk>:

1550s, "stroke of a whip," from jerk (v.1). Sense of "sudden sharp pull or twist" first recorded 1570s. Meaning "involuntary spasmodic movement of limbs or features" first recorded 1805. As the name of a popular dance, it is attested from 1966. Sense in soda jerk attested from 1883, from the pulling motion required to work the taps.

This <jerk> casts a little additional light on the evolution of the <jerk> that relates to whips and sudden movements. However, it does not clarify where the word came from originally.
Next, we looked at the other definition for <jerk> as a verb:

This is a murky etymology full of supposition and options: we find "apparently," "slang," "of uncertain origin," "perhaps," and "alternatively, or influenced by" -- all used to describe the origin of the same word!
I agree, and It also seems clear to met that the <jerk> for a 'sudden sharp pull or twist" is unrelated to the "tedious and ineffectual person". More homographic homophonic words!
My son was also wondering how to spell <jerkily>.  We could not figure out from the etymology why the word starts with a <j>. It seems like it would being with a <g> to represent the /ʤ/. All terms for <jerk> (cured meat; sudden movements; idiot) use this spelling. Since it is a homophone, we would think that at least one of them would be spelled <gerk> to distinguish it from the others.
This is such a great question! It also seems to me that there was a useful option for the later spelling to avoid a homograph by taking advantage of the fact that the initial /ʤ/ could have been written with a <g> followed by an <e>.
One thing your question helped me do was to fix my misunderstanding of hte <j> and <g> graphemes. I had it in my hea that <g> was the default grapheme for /ʤ/ and that we only used <j> when we had a reason we couldn't use the <g>. I now see that as an overstatement that doesn't have evidence.
I did understand the follwoing:
The  <g> and <j> are single letter graphemes that can represent /ʤ/.
The <j> is almost always reserved for initial position, and  <g> can only represent /ʤ/ if it is followed by an <e> <i> or <y>.
What I have been able to refine with your help is the understanding that it is simply more common for <g> to represent /ʤ/ than <j> but it is not the case that we only use <j> when we can't use the <g>. Thanks for helping me drop that misunderstanding!
By researching the Real Spelling Tool Box 2 Theme 3G "Graphemes for /ʤ/, the suffix <-age>, final <ge> or <dge>" I also learned that <j> is a young letter! check it out... 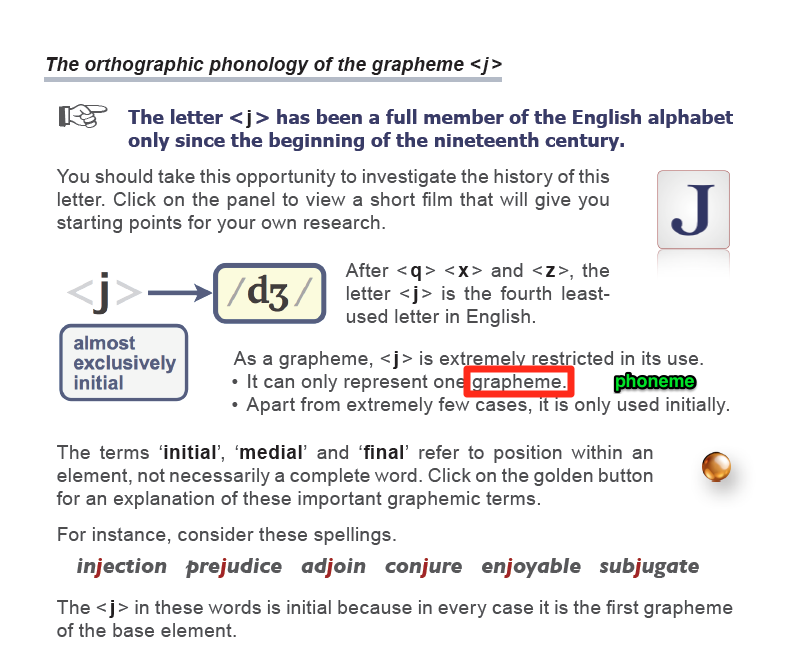 Questions abound!
Indeed, so many great questions you have uncovered. I don't yet know why neither <jerk> is spelled with an initial <g>, but I have learned a great deal. Thanks for your careful question. I'm curious to see if others have something to add that we can learn from too!